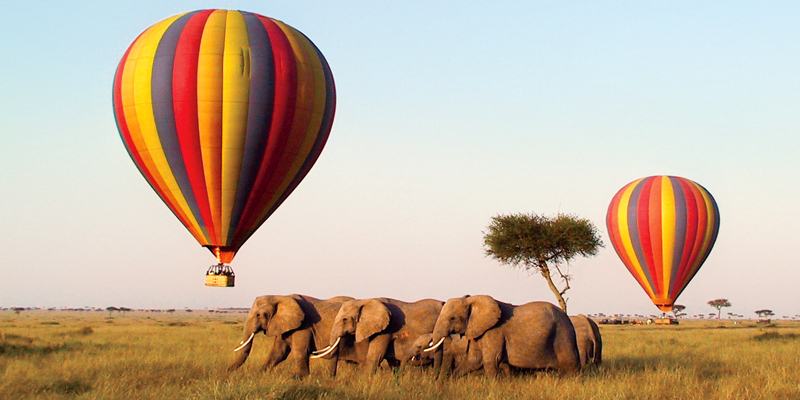 Day 01: Nairobi-Tsavo West.
We will pick you up at 8.00 am and drive via Chyulu Hills to Tsavo West National Park to arrive in time for lunch. Proceed for your afternoon game viewing drive. While in the Park, you will have a chance of visiting the famous Mzima Springs (The source of drinking water for Mombasa). Return for dinner and overnight at the Campsite.

Day 02: TsavoWest-TsavoEast.
After a pre-breakfast game drive, chancing to see what you might have not seen the previous days, depart for Tsavo East National Park for your afternoon game drive. The Park is renowned for its large numbers of elephants and the famous man-eating lions (during the building of the Kenya/Uganda Railway in 1890). Return for dinner and overnight at the Campsite.

Day 03: Tsavo East – Amboseli
After your breakfast, depart for Amboseli National Park with lunch along the way. Arrive in time for an afternoon en-route game drive. There are swamps and springs fed by underground rivers from the melting snows of Mt. Kilimanjaro, which give permanent water to the wildlife. The animals seen here include lion, elephant, cheetah, buffalo, plains game, the rare Taita weaver and the gerenuk. Dinner and overnight is at the Campsite.

Day 04: Amboseli
After breakfast, proceed on a game drive in this Park, which lies in a dried-up lakebed. The animals are mainly found around the Ol Kenya Swamp. If the weather is clear and there is no low cloud cover, you may see the peak of Mt. Kilimanjaro, which forms a beautiful backdrop to the Park. The Observation Hill offers a view of the entire Park and beyond. An afternoon game drive will follow after lunch. Optional: Masai village nature walk or swimming (all at extra cost). Return to the Campsite for dinner and overnight.

Day 05: Amboseli-Mt Kenya
After breakfast, with your a last game drive, depart for Mt Kenya via the biggest open air market in East and Central Africa (Karatina). Lunch is enroute. Arrive at Mt Kenya in the early evening for breathtaking views of the Mountain. Dinner and overnight is at the Campsite.

Day 06:Mt.Kenya-Samburu
After breakfast, proceed for your special visit at the foot of the Mountain visiting the Mau Mau caves (where Kenyan Freedom Fighters could hide from the British Troops during the struggle for Independence). Break for lunch and thereafter depart for Samburu Game Reserve arriving in the early evening. With a game drive enroute, you will go straight to your Campsite for dinner and overnight stay.

Day 07:Samburu
Morning and afternoon game-viewing sessions tracking the rare, drought resistant animals species which can only be seen north of the equator; these are: the reticulated giraffe, grevy's zebra, the gerenuk or giraffe-gazelle, beisa oryx and the blue shanked Somali ostrich. The Ewaso Nyiro River traverses this park, it's source being the Aberdare Ranges. Here, chances of spotting the crocodile in its natural environment are high though the river’s water level varies seasonally. You will have a lunch and leisure break in the mid afternoon. Rest of meals and overnight are spent at the Campsite.

Day 08:Samburu-Bogoria
After a pre-breakfast game drive, depart for (the fresh water lake) Bogoria via Lake Nakuru with a brief stop at the Great Rift Valley view point on a road built by the Italian prisoners of war during the World War II. You arrive in the afternoon for a chance of seeing plenty of the hot water and medicinal springs here and even experience some cooking lessons by boiling eggs or maize on the springs. Continue with your visit of the steaming geysers found in the area. These are spectacular displays of superheated and pressurized water sprays which shoot out of natural underground rocks. Dinner and overnight will be at the Campsite.

Day 9: Bogoria - Baringo - Nakuru
After your breakfast, depart for Lake Baringo having a chance to have a boat ride alongside many Hippos towards the Island for your last nature walk; surrounded by a vast tract of euphorbia and acacia forest. Thereafter proceed to Nakuru for an enroute game drive. Dinner and overnight will be at the Campsite.

Day 10: Lake Nakuru - Naivasha.
After breakfast, proceed to the Park for a game drive. The lake, one of a chain of 8 others, lies in the volcano-strewn Rift Valley, a landform that stretches through the length of Kenya from Tanzania and Ethiopia. The 188 square kilometre Park is the abode of various water birds that breed in the lake's salty water including millions of flamingos, white pelicans and marabou stork; white rhino may be seen as well as the rare Rothschild’s giraffe, cape buffalo and other plains game.

Depart later for the Splendid Lake Naivasha from where you can visit the Hell’s Gate National Park and the Geothermal Power Plant. Lunch is inclusive. This is one of the few places in Africa where you can wander on foot among herds of zebra, wildebeest, gazelle, and giraffe (because of the absence of predators). You will have a boat ride in Lake Naivasha and proceed for your dinner and over night at the Campsite.

Day 11: Naivasha - Mara
After breakfast, depart for the Masai Mara Game Reserve. You drive past Mt. Longonot, a volcanic conical shaped Rift Valley mountain standing freely at about 2780M and the Suswa Mountain, via Narok town and arriving at the Park in time for lunch. A late afternoon/early evening game drive follows, in this ‘big game country’ famed worldwide for it’s high animal concentration, abundance and variety. Return to the Campsite for dinner and overnight.

Day 12: Masai Mara
This will be a day of tracking game with your guide, after an early breakfast. The Mara's landscape is scenic savannah grassland on rolling hills, which enables the reserve to attract sufficient rainfall to maintain and support a large population of herbivores, together with the predators that follow. Elephant, lion, buffalo can be seen with relative ease though luck is a necessary factor for spotting rhino and leopard that complete the big five as the two animals are very timid and sparsely numbered. Plains game like wildebeest, zebra and Masai giraffe abound as well as hippos and a wide variety of antelopes including impala, dik dik, hartebeest, Grant’s gazelle and Thompson’s gazelle among others. We will cater for a picnic lunch at the Hippo Pool. In the evening, return to the Campsite for dinner and overnight.